At the start of this year I made a New Years resolution:

I will not have a boyfriend this year.

I’ve always been a bit of a serial monogamist. I have had a few different serious boyfriends – more than most people my age I’d say – all for a very reasonable amount of time. But they always ended for whatever reason and I’d get another. Not because I was desperate for a boyfriend, just because I fall hard when I do.

I remember having some girls say I should write a book about how to get a boyfriend, and I almost thought about it, I mean, it’s never seemed hard to me. But years later, I realise it’d be a pretty shit book, cos at the age of 28 I could at best write about how to date for 11 years, have 7 serious boyfriends, and still be single.

Or like I call it “How to Get a Man, and Not Keep Him”. Better pre-order!

I also feel like I’m the precursor for guy’s serious life-partners. There seem to be a few babies, marriages and serious relationships in my wake.

You’re welcome, my exes’ new partners 🙂 (not even being sarcastic – they’re great guys).

I don’t think I’ve been single for more than a few months at a time since I was 17, up until my abusive ex that is, but that’s because I was scared to date while he was around. But after he was out of the picture it was only a few months again before I was back in the game.

But not anymore. Resolution is on!

I can’t speak for Charlie of over 3 years ago, but recent Charlie has been through some shit (and if you’ve read my blog, you already know). It’s basically been trauma after trauma after trauma. Not little things either. All three would be individually life-changing and mind-fucking for the best of us.

So yea, I’m not exactly on form.

I have a chronic illness (CVID) so I need regular treatment for the rest of my life. I have bronchiectasis so I cough ALL the time (also for the rest of my life). I have PTSD so I get panic attacks, anxiety and am likely to break down now and then. I’ve been mentally manipulated and physically hurt by a boyfriend so I have protective walls around my feelings. I’ve had my bodily autonomy taken from me, so I have power issues (and know enough about consent to be able to educate my sexual assault counselor about certain things).

Oh, and I’m a career-focused feminist with a very open and honest blog. Funnily, that doesn’t seem enough to scare some guys away. I guess they like a challenge? Or I’m just that awesome?

But honestly, it’s too much for me.

I’ve thought long and hard about my situation and dating and realised that 11 years down the track, it’s time to be alone.

At 28, I’m finally trying this whole “being single” and “being independent” thing.

I really don’t think having a boyfriend would be such a big deal if I didn’t have so much over-sized “baggage” dragging along behind me but, for whatever reason, fate has really pushed my baggage allowance without really asking if I wanted it. And here I am stuck paying the fees.

There’s something about being traumatised, and “broken” – it makes me feel like I can’t date the same any more. Like I have to give someone a link to my blog and be like “get back to me if you’re not terrified at the idea of dating a strong, and quietly fucked-up woman”. Then wait for the unlikely reply (then if they reply wonder what’s wrong with them that makes them think I’m dateable?! Like bro… really?)

But even aside all of that, I also have to like them too, and that’s not necessarily easy now I know how evil the world can be. My list of necessary requirements in a boyf grows exponentially every year, every relationship and every life-changing experience.

Good luck to me, I’m pretty sure I just ruled out 98% of the population.

Seriously though before I even CONSIDER creating a Tinder profile using the penis-shriveling F-word in it, it’s time to work on me.

Time to sort out my life. To do my own thing, on my own terms. To come to terms with everything that’s happened, and is happening, in my life.

Time to figure out who I am outside of a relationship, so I know who I am when I get into one. To get a handle on my panic attacks/anxiety/power issues/emotional walls – I can’t expect someone else to know how to deal with it if I can’t handle it myself.

Time to focus on my career. To learn how to adult. To open my own jars and fix my own fridge. To travel, to experiment, to buy, to jump, to cry, to stay in, to party, to do things BY MYSELF.

Then, and only then, do I feel prepared to let anyone else join me for what could potentially be a long journey (ew, I mean like, in the future).

I’m not a burden, and I’m not broken.

But I do need to actually believe that myself before I can drag someone into my web. 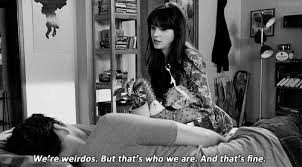 That’s not to say I’m not going to go on dates if they arise (they don’t know I’m crazy), in fact there’s nothing wrong with dating – it’s something to do, plus you get free food and drinks! (JK, annoying girl who tries to pay right here).

It’s just that I don’t want a boyfriend who will ultimately let me down.

I’d rather be alone than have a boyfriend who is there for the good times but can’t support me on my bad days. It’s too exhausting to have your expectations ruined by someone who can’t handle you in all your glory.

And ain’t no one gonna know how to handle you on your bad days if you can’t tell them what the hell is going on.

So here I am, 4 and a half months into my resolution and doing way better than those people who were going to cut down on their drinking (lolz).

Yay for strong, independent, and slightly fucked up women! Single, in relationships, or otherwise – we totally got life.

I definitely just assumed that I’m not the only one… God I hope that it’s not just me..! 😛

(Also, publishers HMU if you want me to write my “How to Get a Man, and Not Keep Him” book – it’d make Whitcoulls Top 100 fo sho.)

Applications now opening for a Sunday bae (or #sunbae) to stroke my hair when I’m hungover and eat burgers and drink beer with me one day a week. Or maybe brunch and Netflix.

Requirements: Must be able to tell me that I’m pretty, that I definitely have obliques and my career is totally on track.

Just try not be perfect boyfriend material until 2017 – that position isn’t open yet.